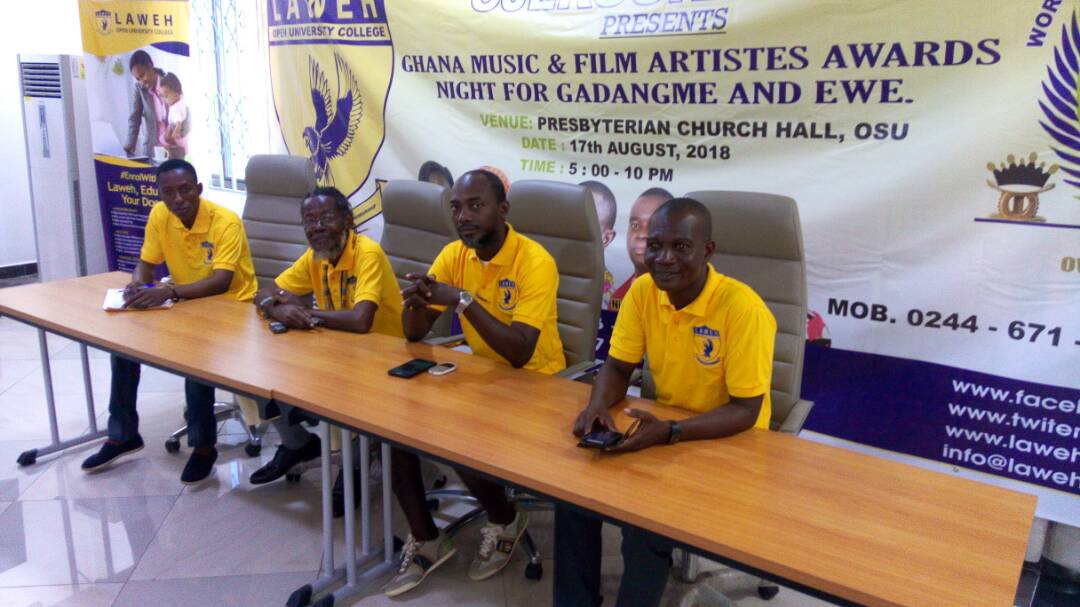 The Committee on Ojekooradio organised event on ‘’Gadangme and Ewe film & Artistes Awards Night’’ is back, and this time selections, chosen by you, dear reader, include the best in the Gadangme and Ewe music industry. From your favorite video to the artist you thought was good enough to get an accolade, this year’s list of winners is both delightful and interesting. We love it when newer names make the cut.
Do not forget that this is the maiden edition and have tried to commit less mistakes as we improve together on the event.
The committee members included people with music and media knowledge through high level indigenous Gadangme socio-cultural book and practical exposure. They are Uncle Nash,who was a vocalist,Samuel Alabi Tetteh,a film Director/Videographer,Eddie Adjei,a film Director/Cinematographer and Isaac Amanor ‘’D.J.Networks’’a music presenter currently with Obonu T V , by means of their various levels of rich experiences.
Nominated Categories includes:

The four- member committee came together as individuals with their own particular professional style at the Laweh Open University College, Nungua with a common passion for promoting the Gadangme and Ewe up and coming artistes. They were put together by the Director of Ojekooradio, Larence Lartey,son of the soil currently in London. The team has become the ideal rock ambassadors of the scene out of enthusiasm for the Gadangme and Ewe ethnic groups.
The aim was to attract attention and triumph over the challenges of fundamental interest of the Gadangme and Ewe artistes. Their drive to succeed and win the crowd in excess has had them reaching for increasingly exhilarating musical and entertainment heights.
“When you put us in a club in front of 25 people versus a stage in front of 2,500, we figured out pretty quickly what works for a large crowd that we hope to inspire on our own one day,” Uncle Nash explains. “So especially our newer stuff, it’s leaning toward Ojekooadio event to a bigger arena, Isaac Amanor ‘’D.J.Networks’’ concluded.
The frequency and grammar of the Gadangme language has fallen drastically as one of the kwa languages handed over through generational effect coupled with verbal and non verbal expressions.
Eddie Adjei says, “We’re definitely confident with the direction we’re going. It’s really happened physically with us working hard to establish high level quality standard.
‘’The vision comes to life in the videos and audios, Samuel Alabi Tetteh.said “I thought about sitting down to do this work mixed with world cup action and festivities both are very real and hypothetical, in creating what is a powerful track and video in my case’’.
The venue for the meeting itself speaks volume of the task ahead and was strategically chosen as the first accredited Open University in Ghana which started in 2016 and geographically located in Nungua. Open University because the school does not insist on stringent academic requirements.
The Laweh Open University College uses blended mode of learning; that is,
I)Face to face interaction
2)Live sessions and finally Online.
The name ‘’Laweh’’ was originated from the lengend, Wor-Lumor Kornor Borketey Laweh Tsuru,Shitse.There are many historical records and archaeological remains of the hero.
The school in collaboration with the entire Gadangme communities is putting up these records to be available in the school for this generation and beyond.
As Ojekooradio has opened up the flood gates for more events, other educational programs and benefits will follow especially on the day the text code for voting will be announced.